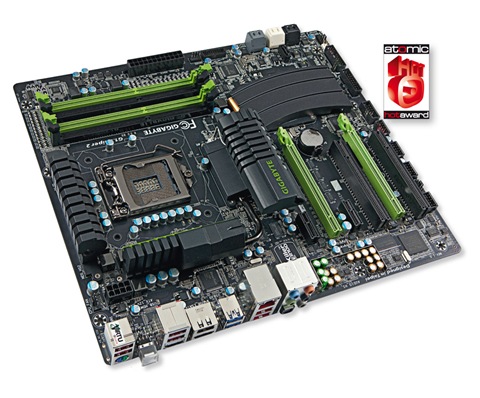 Vito Cassisi at Aussie review house Atomic PC now joins a long and growing list of reviewers that have tasted the incredible gaming delights of our new Sandy Bridge G-Killer board, the G1. Sniper 2. Applause to Vito for asking the most important question:

“Does it kick arse?
We've met the G1.Assassin previously, and  were very impressed by the board. We weren't so keen on the cost. The Sniper 2 is certainly cheaper, but does can it match the X58 variant in performance and features?

We entered the familiar blue BIOS screen and got right into tweaking. We started off by setting the core voltage to 1.45v and ramping up PWM and Over Current Protection to avoid being held back. The memory was then set to 1866MHz and the CPU multiplier to 50x for a 5GHz overclock. After confirming stability with Prime95, a 51x multiplier was used, and then 52x which didn't last too long under stress. Reducing the base clock to 99.5 MHz and increasing the voltage to 1.49v (level 7 LLC) scored us a stable overclock of 5174MHz, which is an admirable achievement. We couldn't raise the memory clock to 2133MHz without very loose timings, so we stuck to the default XMP profile throughout.

Compared to the ASUS Sabertooth P67 we reviewed in June, the extra 150MHz gives the G1.Sniper 2 a clear advantage in benchmark scores, bar the Everest read test due to the lack of a memory overclock. It even gives the G1.Assassin a run for its money - the X58 platform struggles to compete.

If the previous G1.Killer range enticed you, but the price or platform held you back, we highly recommend this board. We're eager to try an Ivy Bridge processor with it!”

Check the review in full on Atomic PC here.