Congrats to all the Winners of the GIGABYTE Z97 Last Hurrah Challenge!

The GIGABYTE Z97 Last Hurrah Challenge wrapped up over the weekend, and you can view the leaderboard over on HWBOT. As with any GIGABYTE overclocking challenge, the results were more than impressive and we wish to congratulate both the winners and everyone who entered. 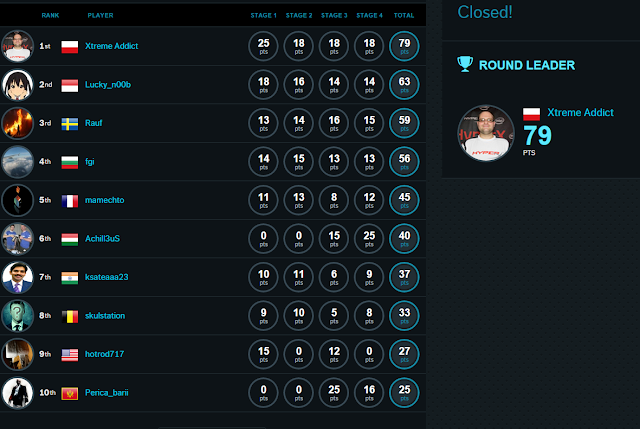 Over at the Ambient Challenge, arhaam from Indonesia's team OC-44 took first place with 73 points while Coldest from Jagat Review's team took second place with 63 points. 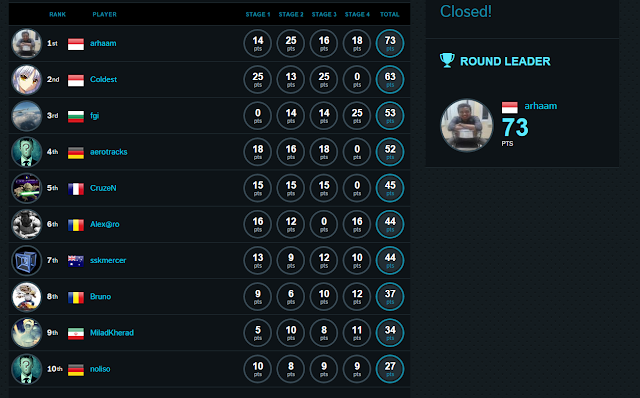 Congrats again to all the winners, and for more information on the contest head on over to HWBOT.
Posted by Sam Reynolds at 11:47 AM 1 comment:

GIGABYTE OC guru from Australia does a 1v1 interview with OCTV, an interesting watch!

Overclocking TV (OCTV) conducted a series of one-on-one interviews with some of the world’s best known overclockers during the recent Computex 2015 overclocker gathering. This week they’re focusing on dinos22 who is one of GIGABYTE’s OC gurus. Check it out!

The Awards Keep Coming in For GIGABYTE

GIGABYTE is pleased to receive two more awards for its 100-series motherboards.

First up, our friends at HiTech Legion recently gave the GIGABYTE GA-Z170X-Gaming 7 a GOLD award. 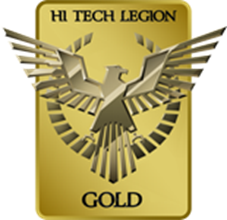 They give the motherboard the highest of praises:

Gigabyte designed the Z170X Gaming 7 motherboard well it is stable, it performs as expected for a high end gaming board it doesn’t skimp on connectivity and is remarkably one of the sexiest motherboards they have ever produced.

Now over at ThinkComputers our Z170X Gaming G1 motherboard was bestowed with a very high score.

During the review the author pointed out some of the industry leading features that allows GIGABYTE motherboards to stand apart from the competition:

As I said in the introduction of this review the Z170X-Gaming G1 has been on my radar since it was revealed at Computex. Now that I’ve got my hands on it and have been able to test it am I still excited about it? You bet I am! Gigabyte has really put together an amazing flagship board for their Z170 series, name a feature and this board has it!

As I mentioned in my other Z170 motherboard reviews with Z170 we are going to see a lot more I/O connections and Gigabyte also has great implementation of this. Gigabyte makes use of Intel’s dual Thunderbolt and USB 3.1 controller. This means you have four PCI-Express 3.0 lanes routed to the Intel controller so you can use 40 Gb/s Thunderbolt 3.0 from the rear USB 3.1 port. Gigabyte also includes the USB 3.1 bay so you can use USB 3.1 devices on the front of your tower. When it comes to M.2 slots you have dual 32 Gb/s M.2 slots which means you can run two M.2 solid state drives in a RAID setup. Gigabyte includes a M.2 to U.2 adapter for NVMe solid state drives too!


Check back soon as we post more reviews. GIGABYTE 100 series motherboards are available now from retailers and etailers around the world.
Posted by Sam Reynolds at 4:42 PM 3 comments:

Turn Your GIGABYTE BRIX-s Into a CustoMac!

Ever since Apple announced it was joining the world of x86, people have been building 'Hackintosh' computers. For those that don't know, a Hackintosh is a regular PC that's running Mac OS X.

Of course Apple doesn't officially support such efforts which is why communities have sprung up to help fill this gap. After all, without Apple's official support the process isn't quite a walk in the walk in the park that you'd expect. 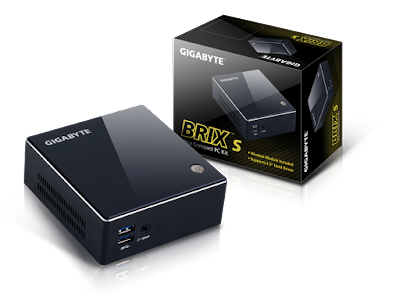 Our favorite community to support such efforts in making what they call "CustoMacs" is TonyMacx86. Recently they published a guide on how to run MacOSX Yosemite on a GIGABYTE BRIX-s. You can check the guide out there but be warned: it's not exactly for beginners but anyone that's comfortable tweaking some settings in their BIOS should be able to pull it off.

So, are you reading to build a BRIXintosh?
Posted by Sam Reynolds at 12:22 PM 1 comment:

It always feels good to be recognized for good work.

As you know, we recently released our 100-series motherboards based on the Intel® 6th generation CPU and the Z170 chipset.

Our board for gamers that demand the best, the Gaming G1, was recently reviewed by TweakTown where it received an Editor's Choice award and a score of 95%.

Here's what Steven Bassiri from TweakTown said about the board:
Apart from having one of the highest capacity VRMs for the Intel Z170 chipset, the Z170X-Gaming G1 has to be one of the most feature packed motherboards. While this is kind of expected since the Z170 chipset is the most feature packed, GIGABYTE went above and beyond the call of duty when it comes to adding features. They not only added 4-way SLI/CrossFireX support, but also the latest Intel USB 3.1/Thunderbolt 3.0 controller and two extra SATA controllers. The board also comes with 13 possible USB 3.0 ports and two 32Gb/s M.2 slots. GIGABYTE even paid attention to the Wi-Fi/BT antennas providing a retention bracket for the MMCX connections which do not use the screw-in method. If all that wasn't enough, GIGABYTE also provides a USB 3.1 front panel bay so that you can use USB 3.1 devices through the front of your case.


This is one crazy packed motherboard. It has all the latest technologies from Intel, Killer, and Creative and they are all implemented well. The Intel USB 3.1 and Thunderbolt 3.0 controller is implemented with the proper hardware for the USB Power Delivery specification and integrated graphics switching, Killer's latest NICs are implemented so they can work together, and Creative's hardware is implemented like it is on a sound card with the addition of replaceable amplifiers and dedicated DAC. 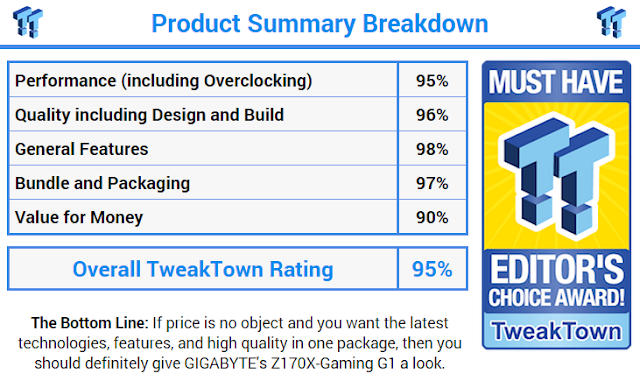 Here is a GIGABYTE Z170X Gaming G1 custom build we've been working on for our Intel Roadshow. Share it with your friends if you like it! 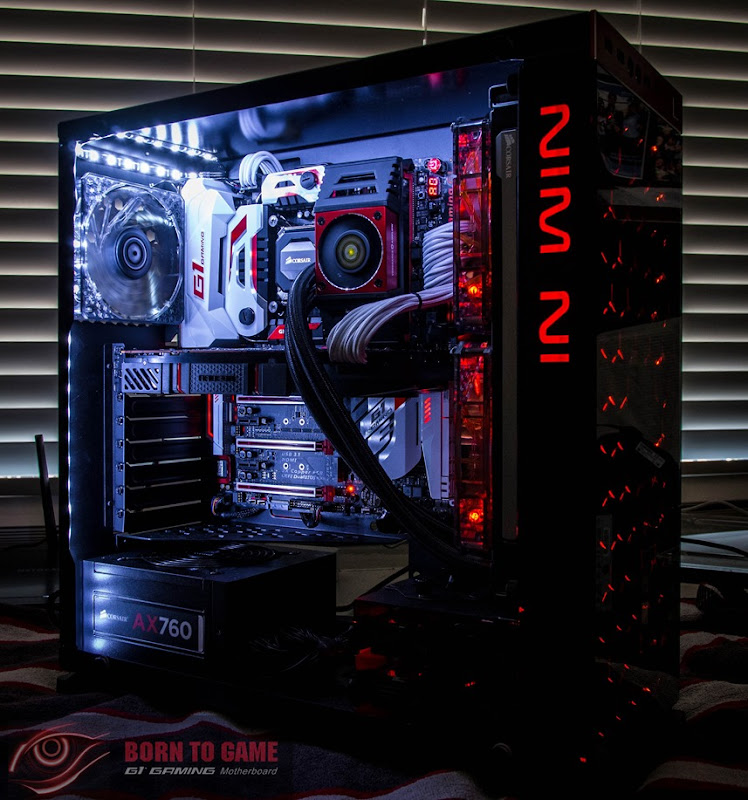 At GIGABYTE we hope you are as excited as we are about the launch of our 100 series motherboards, based on the Intel® Z170 chipset with support for Intel’s new 6th Gen. Core™ processor.

One of the new features that our 100 series motherboards bring to the table is USB 3.1 over the USB Standard A connector and the new USB Type-C™ connector. You've probably heard quite a bit on the USB Type-C connector and know already about how it's making it easier to connect devices to it by being reversible and heard that it can be much more than a simple data transfer port. 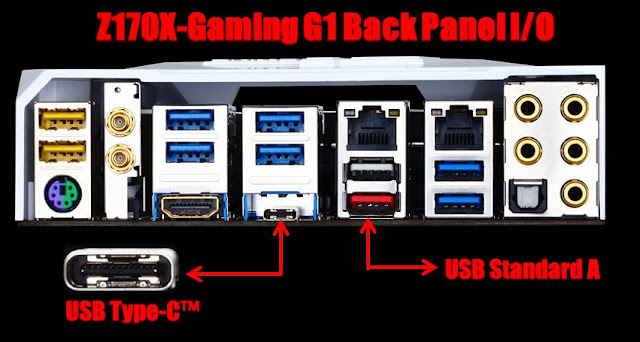 As GIGABYTE is always on the lookout to bring the latest innovations to its new boards, with the 100 series motherboards we are introducing the WORLD'S FIRST USB 3.1 solution powered by the new Intel USB3.1 controller, which provides much more bandwidth than others.

As mentioned one of the main advantage from the Intel USB 3.1 controller is its capacity to utilize 4 PCIe Gen3 lanes, therefore offering a total of up to 32 Gb/s of bandwidth. But of course specs are specs and actual performance may vary, so to demonstrate the increase of bandwidth we've put our working gloves on and put the two onboard fast ports to the test.

While having two USB3.1 devices connected and put under a full loading stress test, we were able a blazing 1725 Mb/read/write performance over the two USB3.1 ports! That is 2X the performance achieved than on other USB3.1 controller.

For those doing storage intensive work such as media editing, this is a godsend. External storage drives are no longer bottlenecked by the motherboard’s connectivity. But increased bandwidth isn't the only benefit, USB 3.1 over both the Standard A and Type-C connector are also backward compatible with USB3.0 and 2.0 as well as support power delivery to charge up your mobile devices or external storage devices, making this Intel powered solution not only a blazing fast one but always one that is compatible with tens of thousands of devices out there!

Through the use of Intel’s USB 3.1 controller, GIGABYTE 100 series motherboards are able to rise above the competition and are the only choice for those that want to experience the full potential of USB 3.1.

The Z97 Last Hurrah Challenge is in full swing right now over at HWBOT, with around three weeks to go before they declare a winner. Right now Lucky_N00b is leading the pack, but it's still anyone's contest to win. 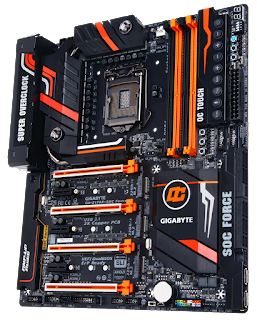 GIGABYTE is pleased to announce that the mystery motherboards up for grabs are two of our Z170X-SOC Force which are designed with overclockers in mind. There's also up to $2,000 USD in cash prizes to be won.

For more on the contest, and to check out the current leaderboards, head on over to HWBOT.
Posted by Sam Reynolds at 11:27 AM 1 comment:

Here's Why GIGABYTE's 100 Series Motherboard is a KILLER

But here at GIGABYTE we took a different approach to the network interface controller with our 100 series boards, which is why we partnered with Rivet, makers of the Killer™ line of network controllers, to integrate its advanced traffic management solutions into our boards.

The first layer of intelligent traffic management comes from the Advanced Stream Detect 2.0 function found in the Killer™ E2400 Network Interface Controller. Advanced Stream Detect 2.0 separates traffic into six levels based so that the user has a seamless, lag-free experience while each level gets the bandwidth it needs. For example, a multiplayer game may not need a lot of bandwidth but it's latency sensitive so its traffic needs to be prioritized. On the other hand, a Bit torrent download requires a lot of bandwidth but its packets can wait so its packets are dropped in priority.

The next level of traffic management comes from the DoubleShot-X3™ app. This app works to improve your network connectivity by intelligently prioritizing traffic over the available connections. Wired connections tend to have less lag than wireless given the nature of the medium. As the graphic shows below, traffic levels that are sensitive to latency (such as games) will be routed via the two Killer E2400 Ethernet connections while traffic that's not latency sensitive will be routed via the Killer Wireless E1535 Adapter.

Why is this important?

Everyone is a multi tasker. While you play a multiplayer game such as World of Warcraft or Grand Theft Auto 5 you're probably running some other kind of download in the background. Without some kind of way to intelligently prioritize the traffic, the latency dependent multiplayer game has to compete with what's being downloaded. This means that your gameplay lag will spike, potentially making the game unplayable.

With the DoubleShot-X3 and Killer E2400, traffic is routed intelligently resulting in up to 10x improvements in latency when multitasking and 75% improvements in single application use. In addition, DoubleShot-X3 combines the speed of two wired Killer Gigabit Ethernet controllers with the flexibility of Killer Wireless to provide max throughput as high as 2.867Gbps.

This is just one of the exciting new features GIGABYTE's 100 series motherboards have. Be sure to check out some of the other posts on our blog to find out more on why GIGABYTE motherboards lead the industry.