Vortez main man Dave Michelson just published his review of our G1. Sniper M3, the first G1. Killer gaming series board designed in the more compact Micro-ATX form factor. The idea of course, is that are some serious gamers out there that prefer to build themselves a more portable Micro-ATX system that they can take to their buddy’s house, LAN parties or where the competitive action is. So as with all of our G1.Killer series boards, you’re getting real discrete-quality audio from the onboard Creative Sound Core3D audio processor and a slick Intel Gigabit network controller, but wrapped in a more compact board that still handles SLI and CrossfireX VGA configurations. 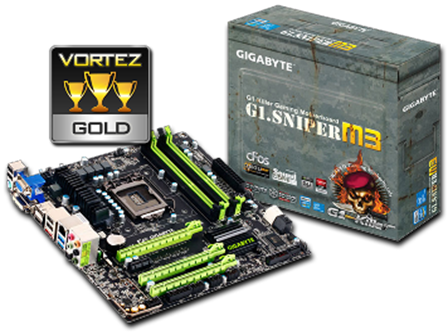 We’re really pleased to see the G1.Sniper M3 is proving to be a hit with reviewers, and it’s especially great to see Dave give it the the Gold award. Here’s a taste of what he had to say:

“There is no doubting that Sniper M3 looks the business. …Looks are one thing but how does this motherboard perform? Well, let me tell you Sniper M3 topped most of our benchmarks and even beat the much revered ASUS Maximus V GENE. The Sniper M3 excelled in this department and showed that for its size it can still pack a punch.

Priced at approx. £139.99, Sniper M3 is a great pick for those wanting a slice of Z77 under MATX form factor. Many will compare this motherboard to the ASUS Maximus V GENE and whilst it does lack the functionality of onboard power/reset buttons, LED debug and a few other features it’s the performance that delivers the trade-off. If you don’t need some of these features then it’s a no brainer.”

To catch the review and peruse the benchmarks in full, head on over to Vortez.net

More details about the G1.Sniper M3 can found on our site here.