I want to go into the main features in a bit more detail to give you a better understanding what they do and how they could potentially improve your OC experience. Main features include:

Hiding under the heatsink are the new 50A rated driver MOS chips used to deliver up to 600A(1200W) load via 12 phases. Dual power design is still in place providing redundant phase power and great phase control.

PWM switch allows “on the fly” PWM frequency adjustment from 600, 800 & 1000KHz (default is 400KHz). This can be handy during initial CPU testing to see what frequencies get the most out of the chips at different loads. It can be done in windows so while doing your CPU testing flick to different frequency and see what works best.

Surface mount POSCAP tantalum capacitors used on the whole board for quality and low clearance. 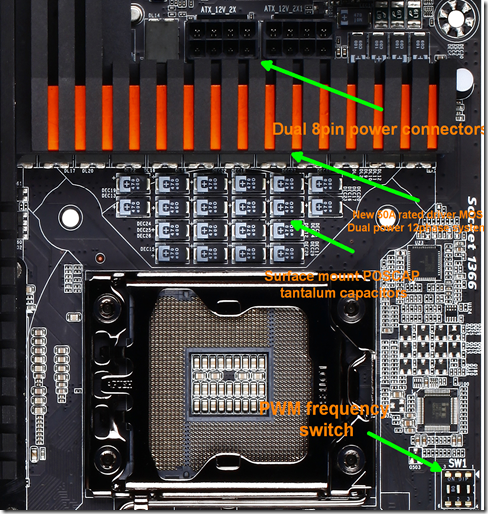 Highlighted here from left to right are LED BIOS POST codes for troubleshooting, measurement points for most important voltage read points named in photo, 4G button allowing a one touch 4GHz OC and a row of buttons allowing real time “on the fly”, hardware level ratio and bclock adjustment.

Real time multiplier or bclock changes used to be done via EasyTune and still can be but for the most part all overclockers will change primarily are ratios and bclock once they know which settings work best. There are a lot of applications for ratio and bclock adjustment buttons such as booting at multi your CPU likes and clocking up bclock. This is one of the best ways to max out most chips and also improve efficiency related to system setting tweaking.

Aside from independent power input to each PCIe slot on the board, additional two SATA power connectors are provided to boost power to PCIe slots in 3/4WAY GPU configurations during benching. There won’t be a need to route Molex cables in between pots underneath the last GPU pot any more. This location is much easier to reach and it won’t even need insulating most likely as it sits a long way away from GPU pots.

New heatsink design is used on the board. There are also 7x 4-pin fan headers which will all be independently controlled through bios for the first time! LED lights on northbridge cooler breaking through LN2 clouds during benching looks OC-Cool (pun intended hehe).

Dual bios files are used on the board as it’s been a standard on all GIGABYTE boards however there is a little twist with the OC board. This board allows users to switch between bios files so you can select which bios to boot from. You might want to have a superpi bios and a 3D bios let’s say allowing to easily boot from the preferred bios. Switch is located at the far end of the board making it easily accessible in multi GPU configurations. 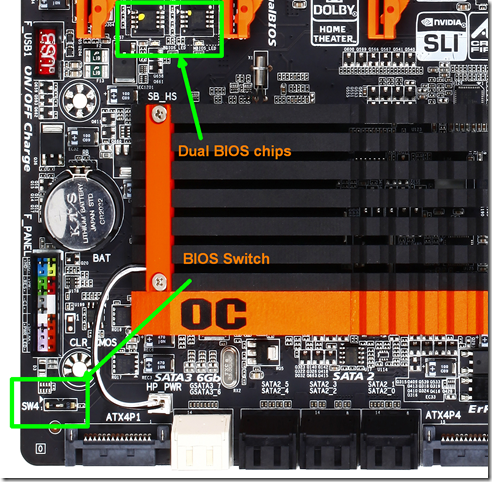