I came across a couple of interesting articles over at VRZone and Guru3D talking about the state of PC gaming. VRZone had a hilarious image to complement the article LOL. 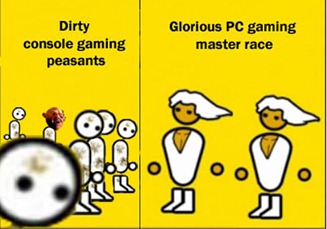 PC gaming is dead, or so console manufacturers and the gaming media over the last five years would have us believe. Every year it seems like another industry head, game developer or media pundit is announcing the death of PC gaming, despite any and all evidence to the contrary. Now, it seems that at least one publisher has noticed that, to paraphrase Mark Twain, rumors of our death have been greatly exaggerated.

In a recent interview with CNBC, the CEO of Electronic Arts, John Riccitiello, said that the PC platform has the fastest-growing software revenues in all of gaming. “Just five years ago, people said that the PC game business was in a radical state of decline because NPD said it was down 10%, 20%, 30% year in and year out,” he said. “The fastest growing platform for video games today is the PC, but it’s growing through subscription, through microtransactions, through downloads.”

Over at Guru3D, Hilbert also had a similar article talking about the fall of console gaming in fact and rise of PC gaming with some sales figures he’s gotten. Here are a couple of interesting quotes.

The gaming world is changing again as according to industry analyst NPD Group, sales of video-game consoles (Xbox, PS3, Wii), software and even accessories fell for a sixth consecutive month in May, tumbling 28% from a year earlier to $517 million. With the release of Diablo III, May saw the first time since July 2010 that the top-selling game was a PC-only title.

That boosted PC video games sales up year-over-year to 230% or $80 million.