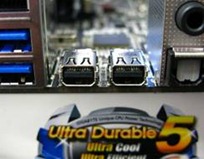 I build PCs on an odd occasion with some sort of focus on gaming or overclocking. It's not every day I build an all rounder PC so Here is my take on one.

When GIGABYTE first got talking about the new Ultra Durable 5 at Computex 2012 with the sweet new power design and thunderbolt I thought, here we go I'm finally going to get the old box out and put together a new PC which serves as a multimedia machine, work machine and an occasional gamer. Bottom line is I'm putting together the trusty all-rounder. Let's start with the hardware I'm using first.

There are the parts I chose but they could certainly change on various components to suit a different budget or brand preference.

Let's start with the board. It's the latest of the Z77 boards. It has USB3 ports on the back, dual thunderbolt and some usual connectors you'd expect from a mid to high end GIGABYTE motherboard. 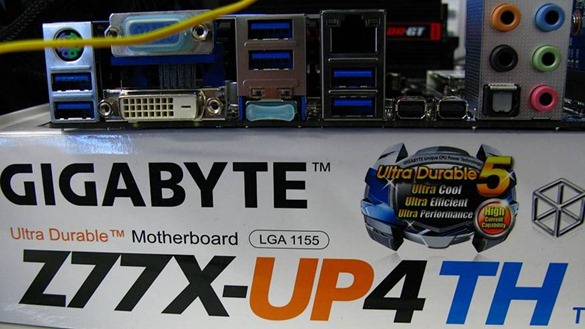 This board is based on Ultra Durable 5 with some seriously powerful 60Amp chokes and mosfets capable of high OC and with very cool running temperature it's ideal for closed waterloops like the Corsair we are going to use. Also important to me is the fact such high spec will mean the power design will stay less stressed over time and live up to its Ultra Durable name. 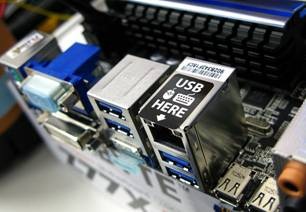 One thing to note with all the USB 3 ports is to install your keyboard into one of those ports unless you are running a PS2 for initial installation until the USB3 drivers are loaded. GIGABYTE put a sticker on there but it seems people overlook that at times.

While we are on topic of making your life easier you should also pay attention to the way you install your watercooler. Corsair enclosed watercoolers are really popular and for good reason. They are simple to setup and do what they advertise without much fuss. There is one thing to be mindful of and that is the orientation of the block. This isn't about waterflow or esthetics but purely mechanical to make sure you do not interfere with the CPU mount on this board. If you look at the two images below, one on the left makes the block sit up as it's leaning on the capacitors while on the right it clears them with ease. I only noticed as my CPU temp was idling 10C higher than it should have been! 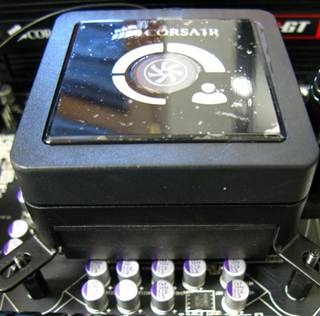 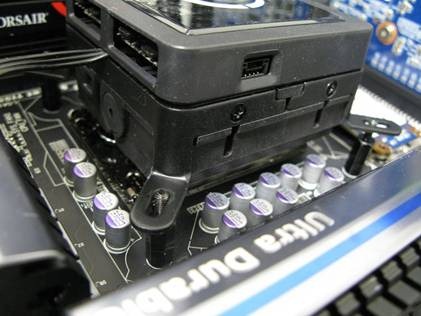 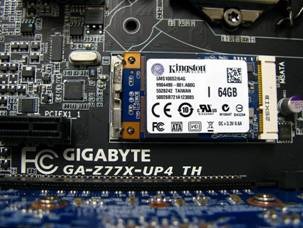 OK let's move on to something that probably a few of you might find interesting. I've got SSD, mSATA flash and standard mechanical drives in the PC build. What the heck right?! LOL. I have to say that in my normal type of geeky benching and testing that I do as a hobby (extreme overclocking), I find that SSD drives tend to corrupt data a bit quicker than normal drives so i tend to have ghost file backups of my "benching" operating systems. Maybe it's just me though but that's what I've seen. When it comes to 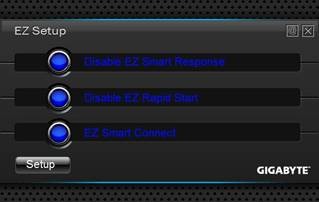 my allrounder PC i haven't  run a SSD as an OS drive because of that reason (as when you backup those images you later discover they can't be loaded on a replacement drive). It's hard to talk about reliability but it is fairly new tech still and i found a way to get the performance but with a bit less risk if you will.

My way of working around it is pretty simple, use mSATA as a caching drive (Intel Smart Response) with a high capacity mechanical drive as the main OS. This works out well as the drive gets sped up but a flash drive and if it was to say die i can just take it out and continue using the main drive until the replacement comes in.

Setting up Smart Response is dead easy, just download GIGABYTE EZ Setup application (above) and follow the prompts. No need to edit registry and all the other heartaches associated with this as you have to change your setup into a bootable RAID (which the software does automatically for you).

Here is what it should look like all setup (on the right). 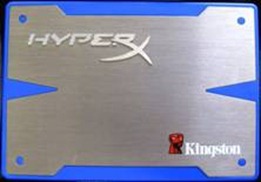 SSD for me is a scratch drive and the drive i use to install my video editing software, games etc. Speed of this drive is no just fast, it's INSANELY fast. I remember the days of super expensive RAID controllers and 8+ HDDs to try and get this sort of performance. Imagine the power consumption, heat and noise associated with that sort of setup compared to one lonely SSD drive sitting in the PC now smashing into the data like a bhoss! I must warn you though, you have to buy a high performance SSD to see these sorts of figures which is exactly what Kingston HyperX SSD is. They aren't cheap but considering they replace Raid controllers and multiple drives, it's actually not that bad and you could probably buy a few of these drives I'd imagine. Hmmmmmm I wonder what two of these in Raid0 would do EEEEK... 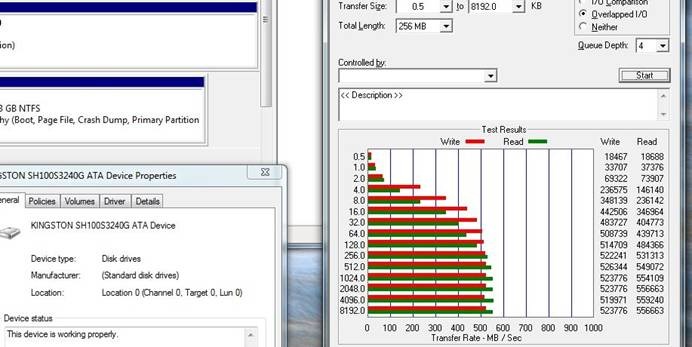 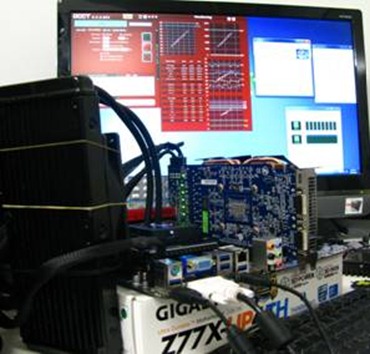 One of the things that made me consider a single drive was because it supports TRIM in a single drive. For those of you unfamiliar with TRIM function, what it basically does is prevent SSD from deteriorating in performance over time considerably as it starts to get filled up. TRIM function was not supported in RAID mode on Intel controllers until recently actually. You will need to have a Z77 board, the right ROM and drives. Here is more written on this subject at RWLABS. While you're at it you should also jump to Lifehacker site and read about some important setup steps when you do run a SSD to prevent unnecessary reads and writes on the flash drive.

I normally run a setup outside the case to make sure it's happy and everything functions as it should. Once I make sure all the temps are alright I'll do some stress testing. The new OCCT application is pretty cool and does CPU, memory and GPU benchmarks. One or two hours of that should give a pretty good indication on system stability. Time will do the rest however as I found out later in the build. During testing it was all passing great and after a week of usage I got a blue screen and after a bit of troubleshooting I found that my RAM overclock needed a voltage bump even though it was passing some RAM based benchmarks OK. That sorted it out and it's been happy for the last couple of weeks since.

On topic of overclocking, I've used a very simple method to OC the machine but simply moving turbo multipliers in bios to 40x hence everything else is running auto including voltage. That was the PC can run most of it's time in idle as it does with most people with the minimum of voltage while it loads up during any stress test as per this video. 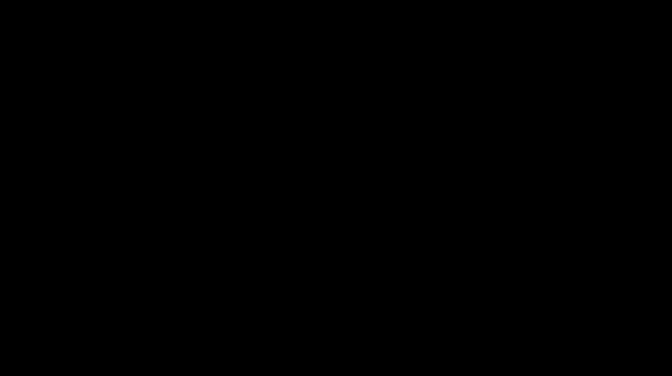 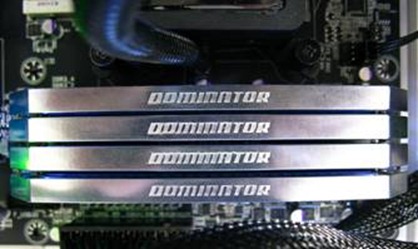 I like good quality RAM as a lot of operations these days go through it. Video editing software such as Sony Vegas or Adobe Premiere will use as much RAM as you can give the application so 16GB of 2133MHz Corsair Dominator Platinum sticks does not seem that out of place. I overclocked them to 2400 and now use 1.6vdimm as opposed to 1.55v which tested OK as it needed a small voltage bump in real world app usage to prevent instability. RAM bandwidth does give a nice performance boost on Intel Ivy Bridge platform so always try to bump up the speed a bit of you can and test thoroughly to make sure it doesn't fall over. Talk about Adobe Premiere, I found a nifty little article that talks about how you can use a normal GTX560 that I have in this rig for example with the new Mercury Playback Engine which helps speed up some video editing effects with CUDA as well as general video encoding. Check it out here.

With all the parts tested and going alright it was time to get it all packed up and put in a case. I picked one of the new Corsair Carbide 400A. It has space for a lot of fans but what i found most useful was a dual radiator space on top of the case. I went with pull configuration (fans pulling air out of the case through to fins to the top as per photo) to prevent fans from forcing dust into the fins of the radiator but also encountered a tight fit with the board heatsink. This case has wide side panels so when you try to close the back panel which hides the cabling you don't have any issues closing the door or trying to jam the cables in there as there is plenty of room. 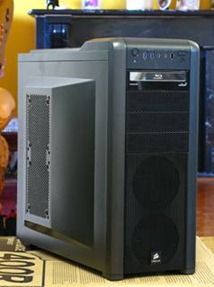 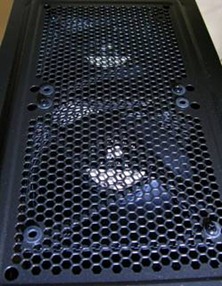 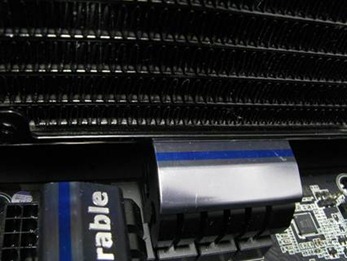 I'm not a professional case builder so you won't be seeing me doing some life changing cable management or anything like that LOL but I think it looks pretty neat the way it all came together. Case manufacturers will need to start looking into making some sort of mounts that secure graphics cards better as PCB sag is pretty obvious in most builds you see due to the weight of heatsinks etc (mind you this is probably one of the lighter heatsinks as well, even lighter than reference design I'd say).

I've got a couple of new peripherals GIGABYTE released which I really dig, particularly the keyboard. It's pretty fancy and I've got a pile of gear from every gaming company that I used for my compatibility testing. This keyboard looks the goods, had a good feel to it now that I've used it for a few weeks, and some of the features on it are spot on for me such as USB3 plug on the keyboard itself that also powers USB Hard drives. I use external drives a lot for image backups and large file transfers and general storage. Mouse has weights in it, I just packed it full of weights so it feels solid, I'm sure I'll improve my fragging performance now too! heheh 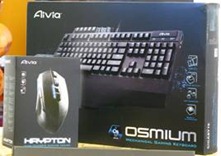 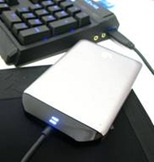 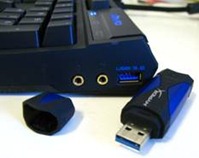 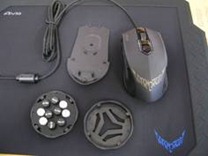 Being able to adjust audio and brightness with a proper quality gear is also a big yes. Wife noticed the new keyboard and sort of lifted it and went, that's a nice one, where is my one!!! LOL Since when do women care what a keyboard looks like...

Here she is in full glory just before I put in a few storage HDDs and SSD. I'm going to put together a thunderbolt based blog soon with some testing I've done recently on this board and a thunderbolt drive. 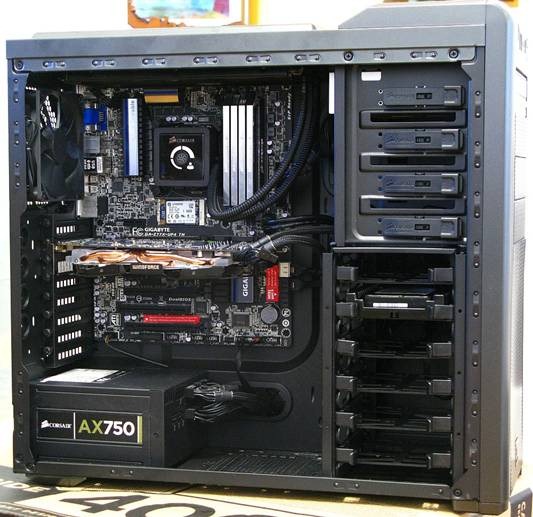