Tweaktown is running a flood appeal by giving away a fantastic Sandy Bridge based system worth around US$5,000. Naturally GIGABYTE Australia wanted to help and donated our top of the line P67A-UD7 board.

Please visit this Tweaktown link to find out how to donate via a $10 raffle to this appeal and help all Australians who suffered from this terrible natural disaster. 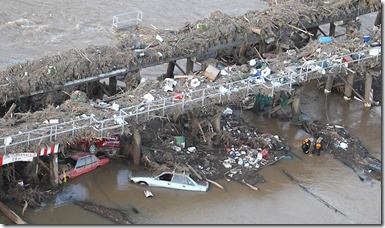 It's been a little delayed due to securing parts, but we are very happy and proud to announce TweakTown's Aussie Flood Appeal Dream System!

As many of you would know, much of the state of Queensland in Australia was devastated by one of the worst natural disasters in the country's history - it is being compared to the tragic Cyclone Tracy of 1974 which flattened 80% of Darwin's houses. The clean-up bill for the Aussie floods is expected to hit at least FOUR BILLION DOLLARS and it will take years to fully recover. People have lost everything, their homes are gone and towns have been completely destroyed.
We have some teamed up with some of our closest technology company friends and rounded up some of the hottest new products on the market to build the TweakTown Aussie Flood Appeal Dream System. Currently the system is valued at $4871.81 USD (based on Newegg price where applicable), but keep in mind that value will only increase as we adding some extras such as Windows OS, games, monitors and anything else that comes our way from kind companies who are getting involved with this project.

Anybody in the world can enter. You will not need to pay the huge shipping bill because our lovely friends over at Thermaltake signed on to be our "shipping sponsor" and cover that bill!