Computerworld.com is reporting that for the first time since the disastrous flooding hit Thailand back in October, hard drive prices have showed signs of dropping. Even though average prices will still remain at relatively high prices compared to earlier this year, it does indicate that inventories in the PC retail channel have started to stabilize, meaning that the worst is behind us. 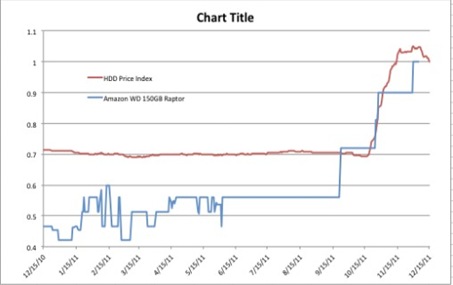 While there was plenty of mass speculation and backed by conflicting reports in the last few weeks regarding this issue, it’s clear that the sudden price hike did nothing to help ship PCs globally, and certainly will have impacted the DIY market to some extent. However, it would seem that certain doomsday predictions were wide of the mark. And after all, from a purely DIY perspective, there’re plenty of reasons to upgrade to a new X79, Z68 or 900FX platform, regardless of how much a new hard drive costs. Indeed many DIY builders will simply migrate their existing data storage anyway, or will be more focused on adding a high-performance SSD to their existing array.