HardwareZone just did a review of the GIGABYTE X79-UD7. They pitted it against the MSI X79A-GD65 (8D) and used an Asus Rampage 3 Extreme as a comparison only to find the UD7 steam roll its competition in spectacular fashion. 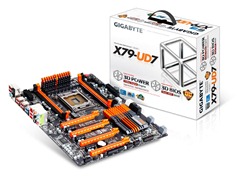 The series of tests that we employed on the Gigabyte X79-UD7 was the same as the one that we had used on the MSI X79A-GD65 (8D). Below is a rundown of the components and benchmarks that we had. We also compared the X79-UD7's scores to those of the ASUS  Rampage III Black Edition to see the former's advantage over an X58-based platform like the latter.

By and large, we can see that the X79-UD7 fared better than the X79A-GD65 (8D), and, logically, much more than the X58-based Rampage II Black Edition motherboard. On Futuremark's PCMark Vantage, it is obvious that the X79-UD7, coupled with a powerful graphics card like the Gainward GTX 580 Phantom 3 1536MB, got a very high score on the Gaming category of the benchmark. Such an impressive gaming performance remained consistent with the scores that the X79-UD7 garnered on the game benchmarks of Warhammer 40000: Dawn of War II – Retribution and Metro 2033, wherein the Gigabyte overshadowed the MSI and the ASUS boards. 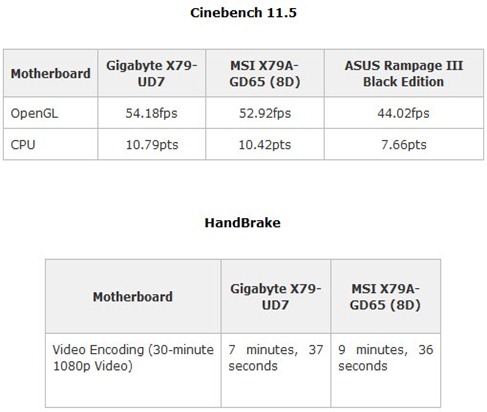 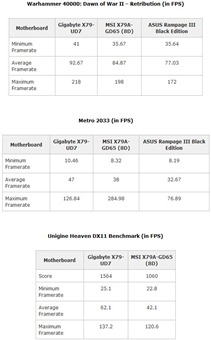 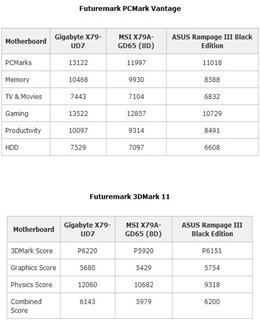