Guru3D give the GIGABYTE X79-UD7 some Dutch love… 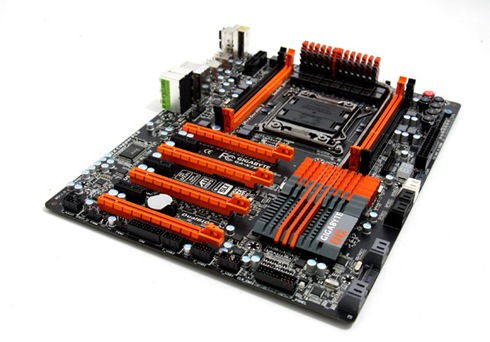 Hilbert Hagedoorn just gave our X79-UD7 motherboard stamp of approval in his latest review for Guru3D.com. Designed to offer overclockers all the tools and features needed to break serous records on Intel’s new Sandy Bridge-E processors, the GIGABYTE X79-UD7 wears our OC badge with pride. After having put the board through its paces, here’s a sample of what Hilbert had to say:

“The X79 UF7 is an impressive motherboard. It's feature rich, a great overclocker and has downright gorgeous looks. If you are a novice overclocker and go for easy, flick the OC button at the rear IO backplate and it will get you an instant performance boost. Overclocking itself with the new 3D BIOS is fun as well, it really is an easy to work in environment. Gigabyte implemented two uEFI BIOSes by the way, you can can switch in-between them (say a normal and high performance profile), good stuff.

For overclocking itself we reached 4800 MHz in a matter if minutes and 5 GHz after a while. That last step did need some fine-tuning though. Mind you though that we work with vanilla picked engineering sample CPUs, we can never guarantee you'll achieve the same results at home. It works vice versa as well, we've seen end-users with much higher overclocks then we have ever achieved, good on ya ;)”

The UD7’s dashing orange paint job gleaned some additional love, which is not so surprising - coming from the heart of a Dutchman.

“Now I live in the Netherlands, we dig Orange as its our national color, as such I adore the looks of the motherboard, but that won't be the same for everybody though. The color is very out there. If you like it, then you're in luck as it's one of the best X79 motherboards out there on the market that matches your style, looks, features and options.”

Check out the full review here on Guru3D.

Details about the GIGABYTE X79-UD7 can be found here.