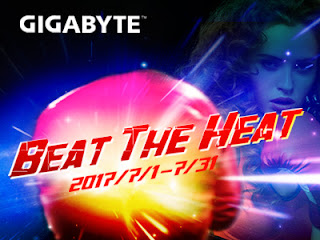 With Summer temperatures soaring in many regions around the world at the moment, it’s an apt time to take a look at how the GIGABYTE Beat the Heat contest is panning out over on OC-ESPORTS. The contest is GIGABYTE’s fifth contest of the year so far and as with previous contest, the company is not shy when it comes to offering attractive prizes. Winners can expect to walk away with really nice hardware that in total amounts to more than $2,500 USD. Let’s a take a quick look at the standings and scores as they stand at the moment with around eleven days to go:

The GIGABYTE Beat the Heat contest runs throughout the month of July here on OC-ESPORTS and is centered on 2D benchmarks and the latest non-HEDT platforms. All contestants must use a GIGABYTE motherboard. The contest is divided into the following four stages each featuring a 5GHz CPU frequency limitation and a specific benchmark:

Catch the full update article here on OC-ESPORTS.
Posted by Dino at 10:00 AM