HWBOT Country Cup 2013 is over, Australia crowned the new champions!

HWBOT held another crazy Country Cup tournament or “World Cup of overclocking” as they refer to it and it was something else this year. The competition was by far the largest one ever run with more countries and result submissions than any other comp in the past.

In the end overclockers from Australia triumphed with an emphatic last 4 stage wins but it was not all smooth sailing for the team down under! Germany, France, Indonesia and USA made sure it all went down to the wire and no doubt will set precedent for another huge clash in 2014.

Let’s talk about this competition a little for those of you who were not aware there was “an overclocking World Cup” on and how you could get involved this year.

First of all for any of you unfamiliar with the biggest and best known overclocking competition website in the world, make sure you visit HWBOT.ORG. For overclockers, this is a familiar website but perhaps for non-overclockers you may remember the recent articles on ban of Windows 8 for competitive purposes which was largely the result of the HWBOT admin team finding some loopholes in the latest Microsoft OS which have since been patched in most cases. Yes, that’s right, this is the gathering place of some of the world’s biggest and best geeks AND nerds who share a passion for overclocking. It’s become a big community in the last 10 years so definitely something to check out in your free time!

Here is a little more about what County Cup is about from HWBOT Country Cup competition page: 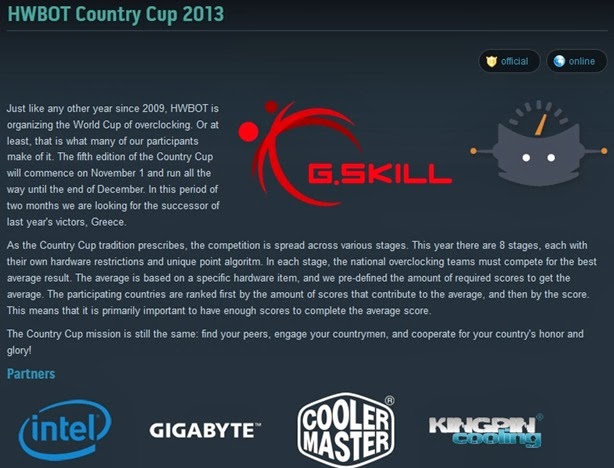 The competition itself comprised of 8 stages with a significant amount of restrictions per stage and requirements for multiple entries over different generations of hardware to be submitted requiring a large group of overclockers to put results in to be able to compete and that’s what makes it a country cup rather than a team cup or an individual effort. It takes a dedicated group of overclockers with a large spread of hardware to be able to compete.

There were stages where some teams did not have enough results and dropped significantly down the rankings including the winning team from Australia who, for example, fell short in stage 5 and dropped severely down rankings. USA was also in the same position in that stage. The most important aspect is to complete all stages to be eligible to receive rankings and points in stages and by missing one part of the score you automatically drop below all the teams who submitted full results for the stage.

Don’t be fooled into thinking that you have to be a professional or semi pro overclocker to compete. Like I said before, there were simply stages where ANY result would have been better than no result and would have significantly helped teams to climb up the rankings. The hardware also was nowhere near the top range. The only stage where really expensive hardware was required was probably in Stage 1 (which was 3DMARK11 Performance which most people ran with X79 motherboard, 4960X CPU and 4x 290X GPUs). There were some stages where only a measly PCI graphics card was needed to compete on which would not have set people more than $20-30. There was also plenty of choice on different platforms to focus including some AMD platform stages and APU benchmarks which were certainly not expensive but were a lot of fun. The benchmark for that stage was Catzilla and to me it was a really interesting stage despite my team doing pretty badly there overall. 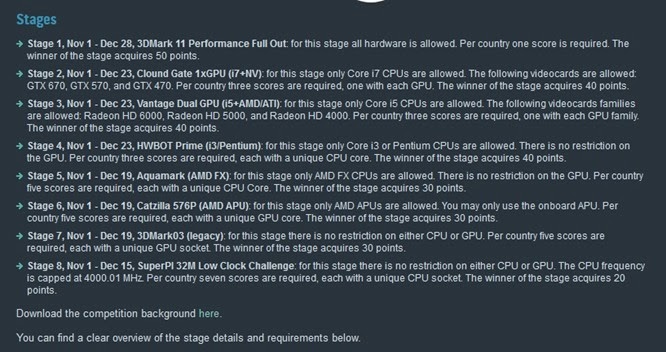 The Cup also had some generous prizes from all the sponsors of the competition. GIGABYTE provided its flagship overclocking motherboard, the Z87X-OC, for all three stages. Distributing these prizes among team mates will no doubt prove another complicated affair considering just how many people contributed to results for all the countries but most guys enter these competitions for the sake of competing and beating their fellow OCers’ scores rather than entering to win prizes. The sponsors were all very generous with prizes which is good to see and these guys should be rewarded for the effort they put in 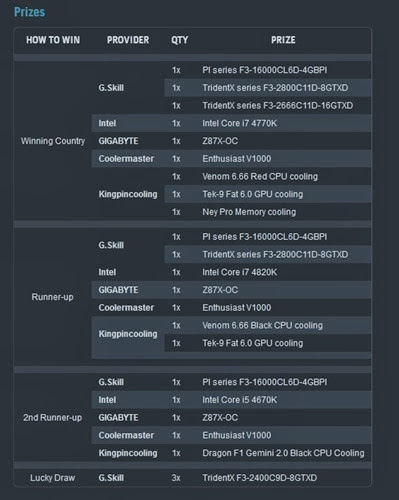 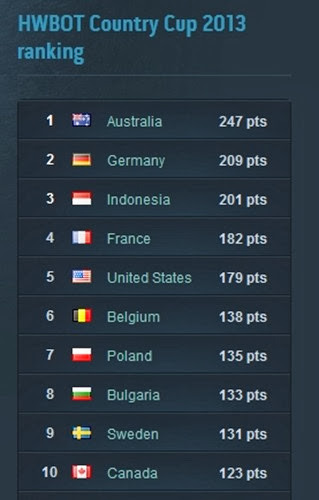 GIGABYTE is one of the proud sponsor of this competition and we loved seeing the competitive spirits rise to the surface where some of the best of the best overclockers competed for their countries to raise the Country Cup and waive their flags proud. We want to extend our congratulations to all who participated and the top 3 teams who walked away with top honours, Australia, Germany and Indonesia. Well done!