Atomic Magazine from Australia got a world’s first sneak peak at the new GIGABYTE 7970SOC graphics card sporting a new looking heatsink design. The card heatsink was raising some eyebrows recently when the new cooler design was recently unveiled and one of the questions on people’s minds was how loud it is and if it indeed cools effectively being configured in air pull configuration. Atomic answers those questions and more.

That is, they are ‘pulling’ air through the GPU block instead of ‘pushing’, which is usually the most efficient cooling method.

The reason Gigabyte chose to pull air was to stop hot air pockets forming underneath the card, in-between the motherboard and the heatsink. In order to stop that, GIGABYTE’s had to make a choice: either set the fans to pull, and sit them on top of the card as it has done, or use them in push mode and mount them on the bottom of the heatsink near the PCI slot. However, there’s very limited room, and that option would likely have impacted airflow more severely than the choice GIGABYTE finally went with. 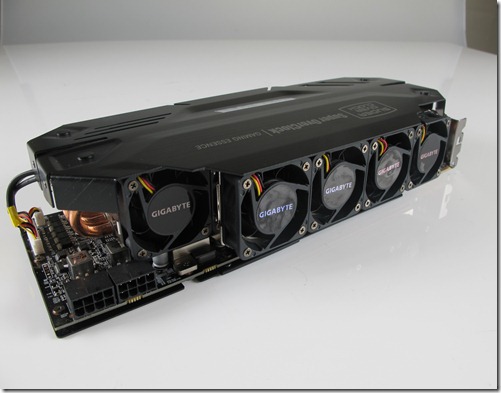 Given the rather enormous four-piped vapour chamber, this card’s heatsink can dissipate an enormous amount of heat. Running the standard 1080MHz core clock on this card, the AMD reference heatsink would be sitting on roughly 85C, if not higher. GIGABYTE’s design managed to keep the card under 64C while benching at these clocks, and even cooler when playing less demanding games like Heroes of Newerth or League of Legends; around 53C, in fact.

Idle temperatures were very comfortable, sitting on 36C with the fans not making more than a small whisper. Using software, we were actually able to turn the fans completely off, and the temperature never went above 48C while running 2D applications and web browsing.

Good to hear one of the sceptics found the answers and was pretty happy with the outcome. I have to get my hands on one of those and freeze it! Visit Atomic for the full story and a gallery.