Vote for GIGABYTE at the European Hardware Awards 2015/2016

Dear GIGABYTE fans,
We need your help! The second round of voting for the European Hardware Awards started yesterday and will be open until December 20th. The European Hardware Association was formed by the largest independent technology news and reviews sites in 2015 and has a combined audience of over 20 million technology enthusiasts across Europe to choose the best hardware of this year! 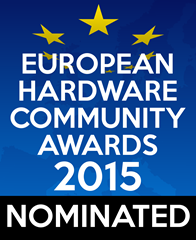 GIGABYTE has numerous products that have been nominated and it is up to you the reader and user to choose the winners! Voting is simple and takes less than 5 minutes, plus no registration is needed so you can simply vote without that annoying step

.
Where can people vote?
Winners will be announced at the beginning of January, 2016.
Thank you in advance for your help and continuous support in making GIGABYTE the great pc hardware manufacturer it is today!
Posted by Unknown at 1:08 PM