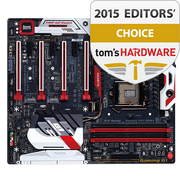 GIGABTYE has put a lot of effort into it’s flagship motherboard and the results are showing. After collecting the Recommended award from Anandtech and the Must Have Editor’s Choice from TweakTown, it is now from non other than Tom’s Hardware that the Gaming G1 receives the 2015 Editor’s Choice!!

The final verdict : “Our current Editor's Choice award replaces our former "Elite" award, where highly-priced products could win simply by being best-in-class. Gigabyte's Z170X-Gaming G1 could have qualified for either of these awards, since it's both elite and this editor's choice. While far from value-priced, an extensive feature set also gives the Z170X-Gaming G1 more features for the money than its lower-cost rival.”

You can read the full review here: http://www.tomshardware.com/reviews/gigabyte-z170x-gaming-g1-motherboard,4347.html
Posted by Unknown at 2:44 PM