Get your 15 minutes of fame at HWBOT today!

HWBOT just reported about the new 3DMARK being released and some early rush from enthusiasts to get their name up on the Hall of Fame. For those of you who are unaware, Futuremark released its new benchmark called 3DMARK. Errrrrr, where’s the rest of the name? There is a FireStorm mentioned in one of the videos but they seem to be calling it 3DMARK. Seems they are following Apple’s recent naming schemes. I’m not sure how popular that naming is seeing Android is taking over everywhere these days.

UK overclocker Tonester0011 seems to be enjoying his few moments of fame at the moment with the highest score set on HWBOT’s Hall of Fame with an AMD Radeon HD 7970 and GIGABYTE Z77X-UD5H. Congrats Tonester0011 lol!

With the new 3DMark just launched a couple hours ago, it is a great chance for the quick benchers in this community to grab #1 rank in the Hall of Fames. Tonester0011 from the UK took that opportunity to become one of the first leaders of our 3DMark Fire Strike Hall of Fame ranking, effectively getting fifteen minutes of fame. Nicely done! 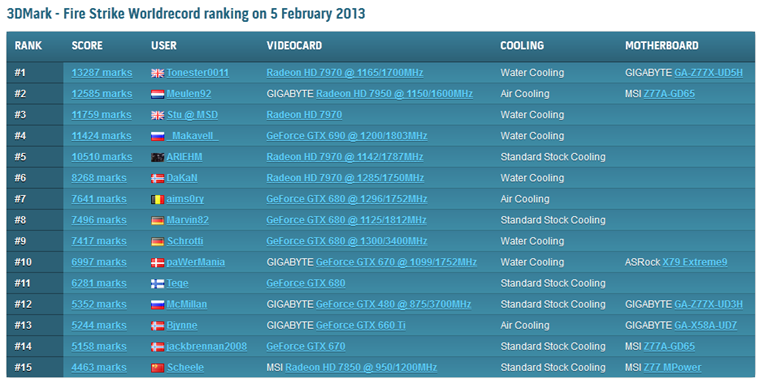